Am pleased to announce that there will be MECCG at StrategiCon/Gateway 2019 over the Labor Day weekend, 30 Aug-1 Sep, at the Hilton Hotel beside the Los Angeles International Airport! Following are the time windows I've reserved for MECCG events, we can be flexible depending on attendance and the players' wishes:

Please message back to let us know if you'll be attending, so we can prepare accordingly. It will be an awesome weekend--looking forward to seeing everyone!

I'll probably attend Saturday only again. I was hoping to play a game with you this last time but then my other Dream Card game ended up going way longer than expected. Let me know if you want to play Saturday morning before your other events.
Top

Sounds like a plan! We'll be sure to make time for a 1-1 dream cards game sometime in the afternoon--I've had a Dain Dwarf-Lord deck that hasn't changed much in 3 years, so am eager to keep testing it out.

I drive between home and LAX each day of the convention, so the earliest I can show is about 10:00 or so. We may have time Saturday morning, depending on who else shows for that time slot.
Top

I am planning on arriving Friday night, checkin' in, if I get there early then cool if the flight times suck then well they suck.

Rez, I want to get in a game with you too!
Top

Okay, so what I will do when I submit the schedules to the StrategiCon staff is arrange 2-hour windows in the afternoons, say, 11-1/1-3/3-5 for Saturday and Sunday, which means we rotate opponents after a 2-hour 1v1 game. I'll still leave Friday afternoon/evening open-ended for MECCG, as I'll be running or participating in other events then anyway.

Looking forward to seeing everyone there--the end of August is not that far away.

Here is the full schedule I just submitted to the StrategiCon staff, including all the non-MECCG events I plan to run or participate in:

Gandalf Gene will be available starting at 1:00 PM on Friday, and I expect rezwits and others will become available by 4:00 or 5:00 on Friday, so there will be nonstop MECCG pretty much until Sunday afternoon.

Please message back to let us know if you'll be attending, so we can prepare accordingly. It will be an awesome weekend--looking forward to seeing everyone!

The schedule for StrategiCon (LAX/Hilton for Labor Day weekend) has been approved as posted above! Hope to see everyone there!

In July I had some health issues concerning my breathing. I am working on breathing better right now, but unfortunately I am not going to be able to go to LAX this year. I told TradewindRider and GandalfGene I was going, and I had paid for my airline ticket and almost got bit on the room and pass. Luckily, I got my pass refunding by the organizer.

I am truly sorry, but with my breathing I just really don’t feel comfortable getting on a plane or sleeping for a couple nights in the hotel room.

I feel really bad about the whole thing.

Hope you guys have a blast!

No worries. We hope you feel better and have a smooth recovery.

No problem at all--based on our conversations last month, we'd already made plans to revisit sometime in October for more MECCG in Vegas!

Feel better, and talk to you again soon!

I went on Saturday and played Arda and a few 1v1 games.
-----
Arda ended up being fairly friendly, with Gates of Morning and Sun being played consistently and no Doors of Night. Still, 4 it 5 characters were eliminated.
------
One of the GMs for another game wanted to play MECCG for a bit. He used a pumped up Elrond challenge deck vs another pumped up challenge deck. He went to Moria to play Book of Mazarbul. His opponent was playing all of the Spawns with spiders for hazards and played Balrog with Unabated in Malice on guard.

Gildor used Escape (fly you fools!) to cancel Unabated. Elrond faced off against the Balrog, using Vilya, with Elrohir for support. After that and Star of High Hope, Elrond needed an 8 and he got a 10! The Balrog was defeated and Elrond picked up the Book as well after munching cram. Very exciting! 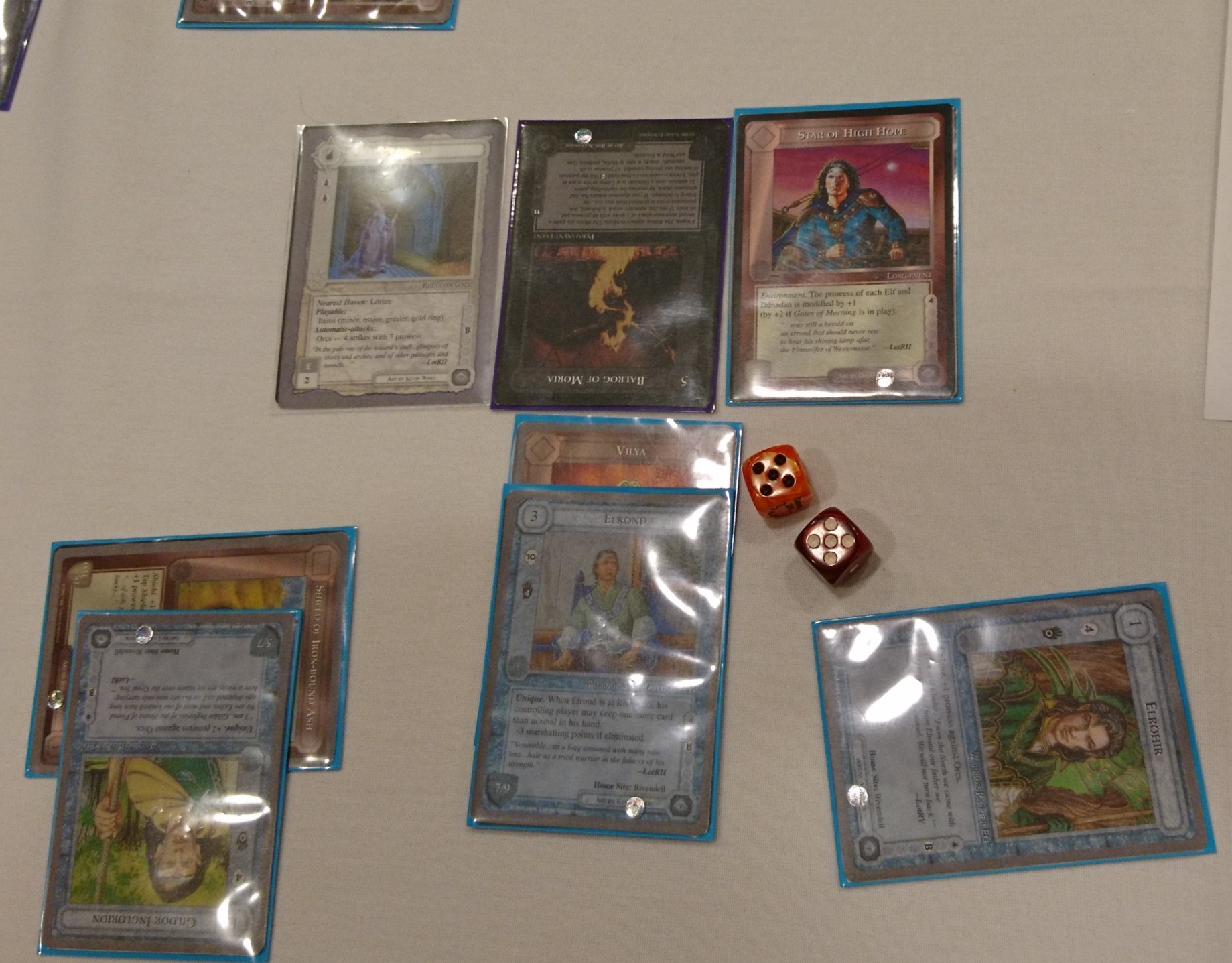 ------
As for my games, I have a wizardless deck with Denethor, Boromir, Faramir, and Beregond in Gondor. They get much praise but little help. The hazards use tapping and snowstorm hazards. My hazards did well. But Boromir ran away with the Scroll of Isildur. My opponent had man hazards to hit Gondor regions and sites. Almost all of the Rangers of Ithilien were assassinated.

I also played a covert minion Gondor deck with Ringwraith Uvatha and agent hazards. It uses the Variag and Easterling characters to sack Gondor with the help of Gondor agents. The outter-Mordor area agents act as kidnappers for the hazards. I got my agents into position and attacked but never was able to take any prisoners back to the Easterling Camp. And I was never able to play Mumak. This was a high scoring game on both sides with my opponent getting a ton of item points. I had a ton of Misc points. Uvatha failed to recruit the Asdriags and the Palantir of Mina's Tirith was discovered too late.

I also played an Eriador area hero deck using Hobbits. They made friends Here, There, it Yonder and sang Hey Come Merry Dol. But even with Tom Bombadil, and Master of Wood, Water, and Hill, the Hobbits still got pummeled by creatures as my opponent had Cave Drakes and Rain Drakes. At least my Hobbits didn't run into Old Man Willow, who was out attacking dwarves in Dragon country. 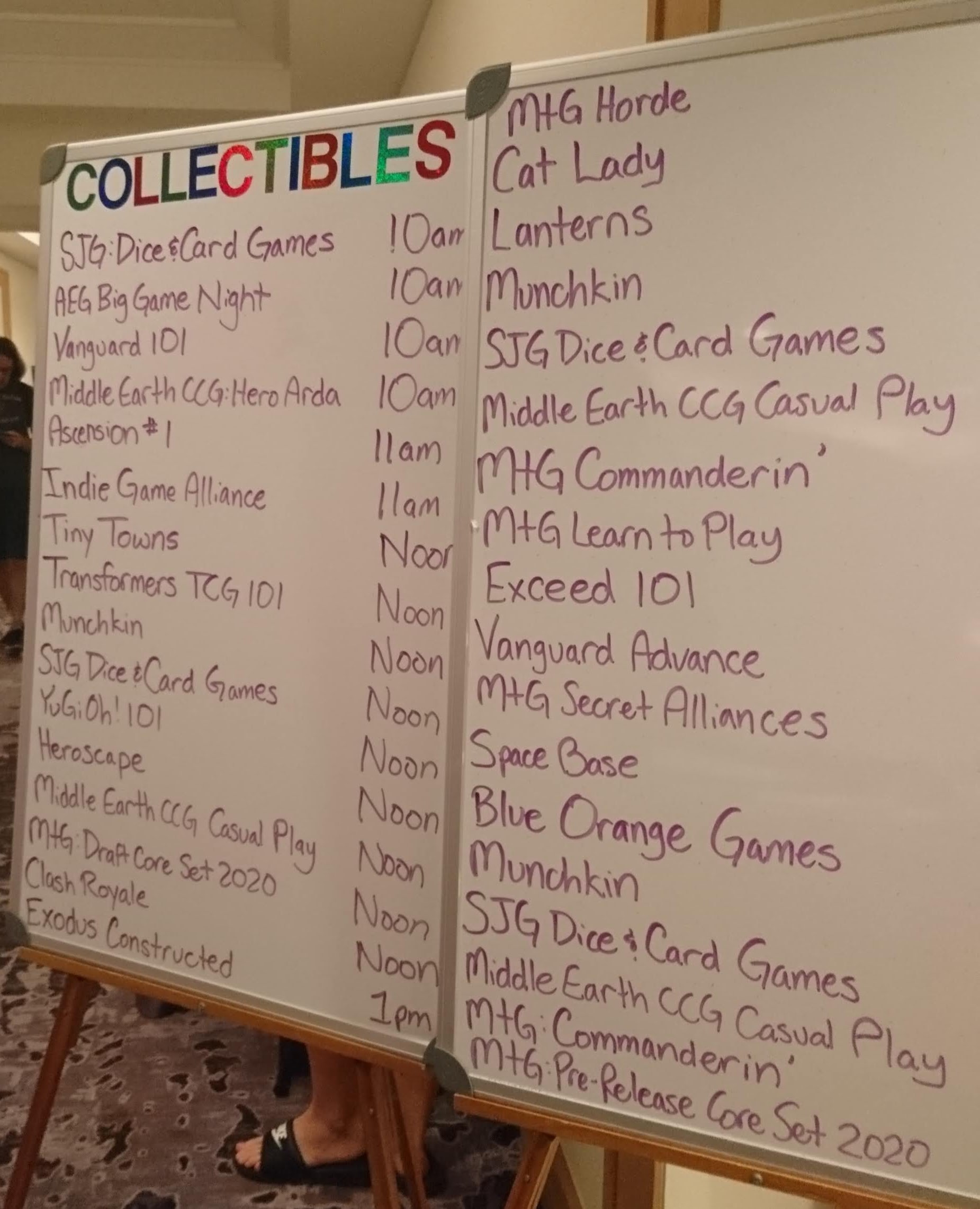 Great tournament report. That is an epic ARDA story! One for the ages!
Top
Post Reply
13 posts • Page 1 of 1