Everything related to buying, selling or trading your MECCG.
Post Reply
9 posts • Page 1 of 1

I came across a rather large collection of MECCG cards, and have no idea/time to play the game. Before breaking it down into singles and posting on eBay I figured I would post the full collection for sale here. The collection is made up of both black, grey, and blue border cards, and there is about 4,000 cards or more I would estimate. There are a ton of duplicates, with some cards having over 10 copies. Unfortunately they are only semi sorted, and I don't have the best idea what I am looking for. Also a lot of the cards were stored with rubber bands for a long time and they stuck to some cards. I saw some lists of card rarities and found the following after a quick pass through some of the cards. Looking for an offer on the full collection, I will ship international. 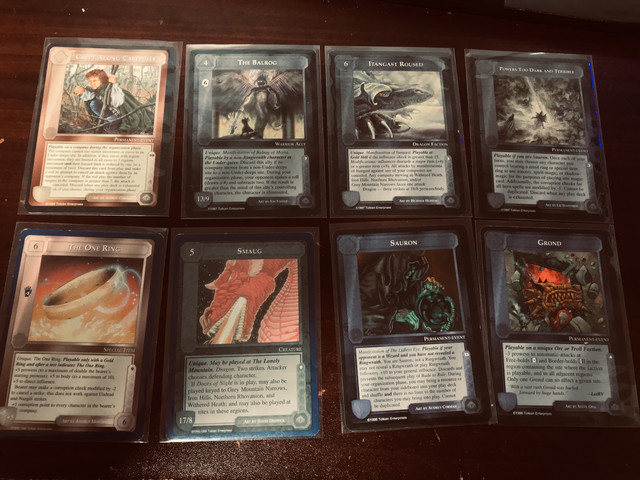 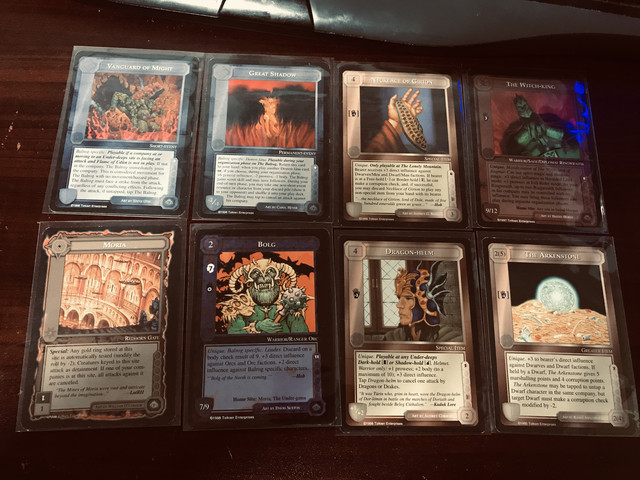 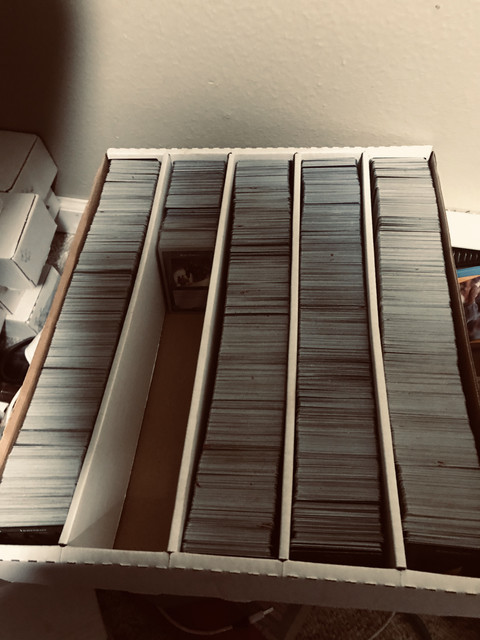 The collection clearly has some value just based on the 2 pictures you provided.

Unfortunately, it will be impossible for you to get a reasonable offer on the collection unless you are willing to provide more specifics. This would of course take a little time on your part.

I suggest you print out the set lists for The Balrog and Against the Shadow sets (found on our home page) and go through and highlight all the rares you find on those lists.

Alternatively, you could make a YouTube video where you slowly thumb through all of the cards so people can see for themselves what’s included.

Best of luck to you!

Oh, also, if you’re going to sell everything in one lot like this, you won’t get anywhere close to “full value” for the cards. That’s the trade off for saving tons of time and fees if you were to sell it piece by piece. That said, you likely have several hundreds of dollars worth of cards (maybe much more), so I advise you don’t just give it away to your first low ball offer either.

I will get the set lists and try to find the rares. I appreciate the feedback as I have no idea where to start with this stuff. If it was MtG or Pokemon I would be better off. I will try to get the list updates this weekend.
Top

Definitely some rare and valuable cards you have there! Definitely take Jabberwock's advice.

Also, there are little symbols in the row of circles along the bottom right corner (it will also have a number between 2-12 in one of the circles). These little symbols can be very faint. But they might be able to help you differentiate between sets.
Top

Also, if you by any chance know the "Boxes" that were used to build the collection, that also helps.

But, if you have no idea on that either, then yeah UGH

Rob,
Where are you based?
Top

I am based north of Seattle, WA right on the USA/Canada border. This collection was purchased as a huge lot that was mainly sports trading cards. There was a couple show boxes of MECCG cards, semi sorted in chunks and wrapped in rubber bands. Cards very from played/damaged to near mind. Seems most of the rarer stuff is in better shape. I have no idea what all went in to this collection
Top

Hi Rob,
you shall also see if you can identify cards from another language than english. Some may be quite valuable, like the Japanese I'm looking for. If English are the average value (blue border being 40% less valuable than black borders, Spanish and Japanese (with a few Italians) are the upper class value. Italians/Finnish/dutch/German are average too, but sometimes less looked for. French is still findable, so I'd rated them a bit lower.

And among the cards's extensions:
The Balrogs are the most lookek for, then Against the minions (due to 9 ultra rares cards), then Lidless Eye and The Wizards .
Less important but still played off course: The white hand, Dark Minions, and less valuable, The Dragons.

And eventually, you may identify some promo cards. Given their language, they may have some real value.

Good luck sorting them and tell us when you'll know more

I am interested in getting back into the game and was hoping to find a lot as complete as possible. DM if you are still looking for a buyer.

Return to “The Marketplace”