Any rule erratum or clarification submission for the upcoming 2019 ARV should be posted here.
Post Reply
51 posts

CRF wrote:Normal means as written on the card, not considering other card's effects. Note that this definition only applies to effects referring to card texts.

Hm. I was not considering this CRF. I wonder how many other cards use "normally." I found another CoE ruling by looking at the URD.


CoE 95 wrote:If a card has alternate values stated on the card itself depending on its condition, these are considered
normal values. i.e. Durin’s Axe is normally worth 4 MPs when held by a Dwarf.

So, Theo, by these 2 rulings, you are definitely right that the card's own effects matter as far as "normally" (which goes against what I wrote above, about normally == printed). But I am still not sure about using the Dunlending Raiders as an AA at Framsburg... Beyond the word "normally," what about this hypothetical (which has similar issues and could be helpful).
Of course, Dunlending Raiders are normally playable keyed to "A"

in the specified regions). So the wording on Framsburg seems to work. But I still think that those region limitations on the Raiders would limit playability unless the AA specified "at

My thoughts on site type, worded similar to the MELE rule for regions: Note: A creature played keyed to site types in a specific region by name is not keyed to the specific region's type site type.
Top

rezwits wrote: ↑
Tue Mar 19, 2019 4:23 am
If I did have any fustration, it would be that I tried to agree with you and see it your way, (which I already did once while we were playing), and then on the forum in discussion, and you just shot me down, and I was agreeing with you.

Is this again about whether Adunaphel can be used as automatic-attack at Framsburg? I didn't mean to be shooting you down; I just thought I was clarifying an important subtlety about why I thought Corsairs can be used under the current rules (and Adunaphel can't).

It sounds from your last message that while you aren't intending to be attacking, a lot of your frustrations are with me rather than what the current rules might be. So let's chat more in other channels and try to preserve this forum for discussion of the current/proposed rules/interpretations. I will say that I have a different memory about our games, and so I feel like your renditions---malicious or not---are defamatory, and I want to address them publicly at least briefly as well:

In disagreement situations in general I try to give a quick rationale/reference when I have it on hand, and am always open to the same. "I like being right so much that when I'm wrong I change my mind." And at least I will admit that have been wrong many many times over the last 24 years, often glaringly. So, I'm surprised by your description of my insistence on being right, or needing to having things my way. Meanwhile, you and I have consistently played according to the "when is a company at a site" rules that you prefer, for example.

Even if a rule is clear in my mind, other folks here could support that I'm open to doing what works for the individual game, especially if my opponent's deck design hinges on a misconception (but I do try to be clear to them what I think the true standard is, which perhaps you interpreted as inflexibility in the game itself?). Sometimes I get more resistant when it is something that I've tried to earnestly study, and no text can be found in the moment otherwise, but I'm working on that. What doesn't tend to work for me is nothing but "this is correct because my group never allowed it in 20 years" with no other balance/enjoyment basis and despite conflicting evidence in the rules texts (which others are far more guilty of than rezwits). My mind has nothing about believing that I'm thinking of something no one else has thought of before; that is simply statistically absurd. But I could understand if it seems like I'm the first to bring some underlying textual implication to greater attention when the "never in 20 years" crowd successfully subverted all of those that previously realized it.
It is not our part here to take thought only for a season, or for a few lives of Men, or for a passing age of the world.
One [online community] with hammer and chisel might mar more than they make... Cautious skill!
Top

Wait, are we saying that Wild Fell Beast (

) can be played as AA at Framsburg (which says "

"). That seems like an oversight. Surely Giant Spiders would be more likely than a Wild Fell Beast.
Top

It might be ambiguous based on whether you parse Framsburg as:

My opinion is that the second is the more correct parsing, but why the "single" word appears then is mysterious.
It is not our part here to take thought only for a season, or for a few lives of Men, or for a passing age of the world.
One [online community] with hammer and chisel might mar more than they make... Cautious skill!
Top

Wait, are we saying that Wild Fell Beast (

) can be played as AA at Framsburg (which says "

Yes.
We will not speak of such things even in the morning of the Shire.
Top

Theo wrote: ↑
Fri Mar 22, 2019 7:57 pm
My opinion is that the second is the more correct parsing, but why the "single" word appears then is mysterious.

May be it’s an mistake by ICE: the just had all those double wilderness (even triple once) in mind and wanted to exclude those from being played.
The just oversaw that the Fell Beast has a double shadow-land on it and therefore did not put single in before the shadow-land.
Co-founder of the Hamburg Scenarios and Former Slave of Lure's Price Ceremonies
Top

it is listing so: "a R&L, (a) Shadow-hold, (a) single Wilderness, or (a) Shadow-land ... must not be explicitly there for it to work for me without being able to key "Wild Fell Beast" to it,

some people just get the kick out of finding something now though of in 25 years to make them feel special, again neither Theo nor Konrad are that close to the top 20-30 players as some others among us here are, never was it ruled in major tournament (to my knowledge) that would is discussed in this post can be played at Framsbug as an AA, mostly due to common sense and yes I know the wording is sloppy, still give me break.
There is just not enough people to be bothered by it it seems, still I would argue that most top 20 players would rule otherwise!

so if Heiner, Mark A., Patric, Karsten, Mario, Kodie, Marc R. Pawel (I am sure to miss many who should be on here), etc. would ship in, you guys would not need to take my word for it!
Top 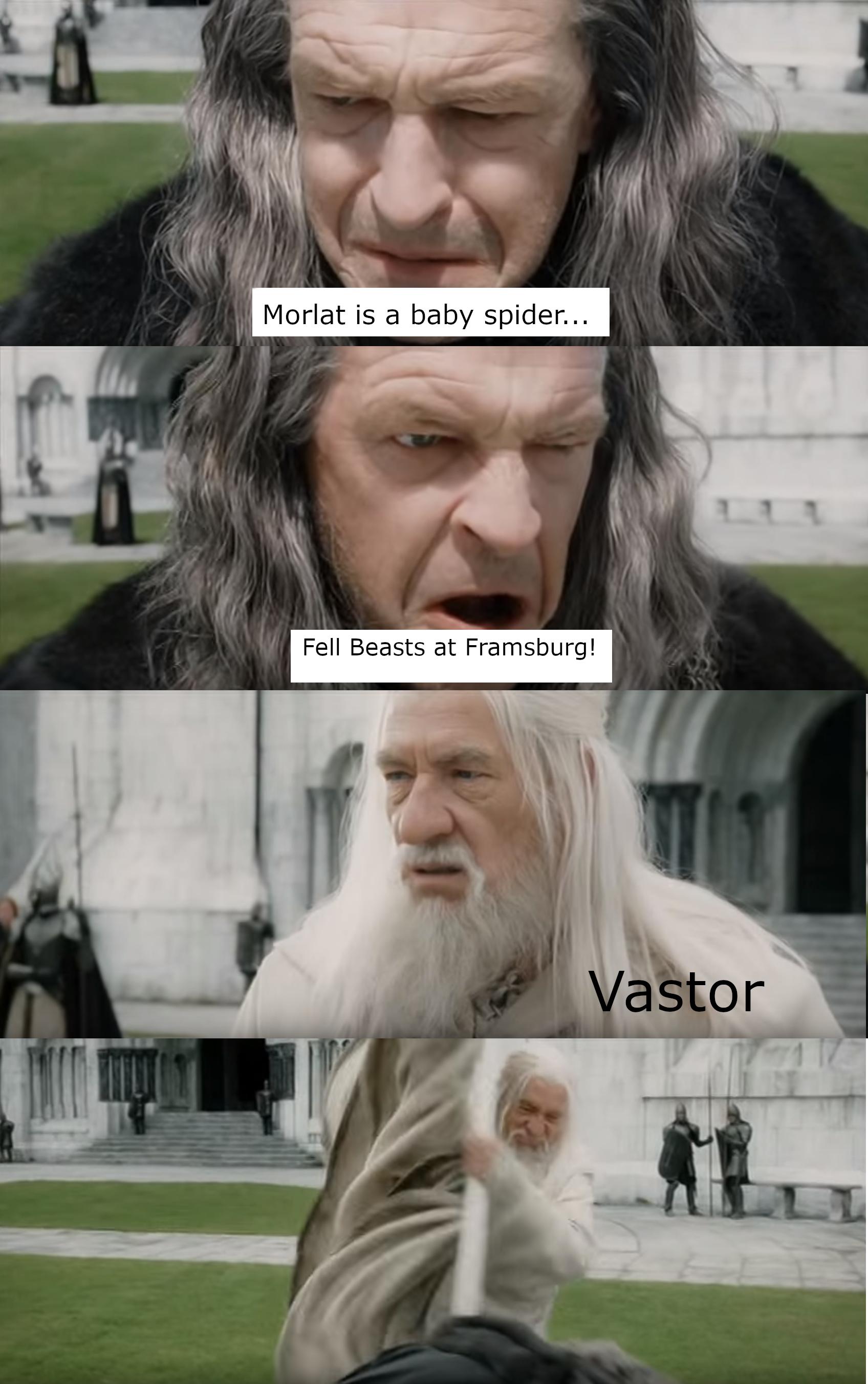 My opinion is that the second is the more correct parsing, but why the "single" word appears then is mysterious.

If there would be a colon after "playable keyed to a", I would agree.
We will not speak of such things even in the morning of the Shire.
Top

To get this discussion back to the final wordings of the errata/clarification we should close the debate on Framsburg and the Wild Fell-beast and split that up into another ARV, which I posted here: https://councilofelrond.org/forum/viewt ... 145&t=3792.

So we can focus on, how "normally played" should be defined, to make that undisputable in future.
Co-founder of the Hamburg Scenarios and Former Slave of Lure's Price Ceremonies
Top

I would hope most actual top players would be more excited to play by the correct rules than some random interpretation or stopgap. It would be a pretty meaningless accomplishment to be a top player if the rule system was based on those players deciding the rules. Judges participating in the tournaments they judge tends to be prohibited for most judged activities, for example. Or are you worried that you, Vastor, aren't good enough to be competitive under the accurate literal interpretations, or if you're not hoodwinking someone because they didn't know your insider's club non-written rulings?
It is not our part here to take thought only for a season, or for a few lives of Men, or for a passing age of the world.
One [online community] with hammer and chisel might mar more than they make... Cautious skill!
Top

I think the point of the ARV process should be to:

So even if every player is not playing the cards as they are actually literally worded, that should be OK and then we can clarify the card's effects here, by the ARV.

I don't think the idea is to tell people they are not playing within the rules, or to change how cards are played.
Top

in its path).
This does not seem as intentional approach.

I'm currently trying to transforming this thread and the opinions expressed here into a votes proposal for this year. I've read the whole thread a couple of times and try to take into account all the relevant aspects. I'm not intending to solve the Framsburg-Wild-Fell-Beast problem within this issue.

I'm quoting some things that to me seem relevant.

Konrad Klar wrote: ↑
Sun Jan 06, 2019 6:25 pm
I do not see an essential difference between additional playability conditions of Rain-drake or Giant Spiders and "with someone wounded" condition of Morgul-rats.

CRF wrote:Normal means as written on the card, not considering other card's effects. Note that this definition only applies to effects refering to card texts.

From these, I'd form the following proposal for this year's ARV:

Creatures that can be played as an automatic-attack and that must be normally playable keyed to or normally keyed to a specific site by type or region, may be only played if these requirements are met as written on their card text.

Consequently, for the example of The Under-grottos with a 2nd AA playable normally at

:
- Morgul rats can be played in case of DoN or a wounded character.
- Giant spiders cannot be played, as they are not playable to

in general, but only to a subset of

I agree.
We will not speak of such things even in the morning of the Shire.
Top
Post Reply
51 posts