The place to ask all rules questions related to MECCG.
Post Reply
9 posts • Page 1 of 1

Can I play multiple Mount Slain on the same strike? (AKA Can I kill 3 evil horsies from a single Nazgûl?) 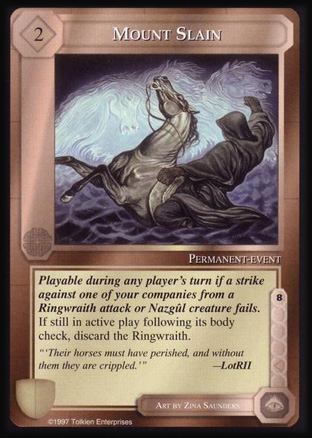 C'mon, not the Elves of Lindon AGAIN...
Top

I don't think this was addressed in any of the Digests or the CRF. I don't see why you couldn't.

Some might even say that you could play it 20 turns after the strike fails. But that seems unreasonable to me.
Top

It seems that you should have to play them sequentially (i.e. you have to resolve the first copy of Mount Slain before you can play a second copy). If this is the case, then the card text, "If still in active play following its body check, discard the Ringwraith" would seem to prevent you from playing the second copy. Once the first copy resolves, the Ringwraith is discarded and is no longer in active play. At this point, there is no target for the second copy, hence it would fizzle.

I am no expert on targeting rules, but this interpretation would seem to fit the thematic intention of the card: one Ringwraith rides one mount, no more.
Top

I agree thematically. But the discarding is an effect and not a condition. And in cases where the Ringwraith is eliminated or discarded by the bodycheck, or if it was a Nazgul attack, there is no effect anyway. But you still get the 2MP.

You would expect to see "cannot be duplicated on a single strike."
Top

I thought something like that might technically be the case. I suppose it is one of those cases where the authors of the card thought it was perfectly clear that only one Mount Slain could be played per failed strike, and never expected that players might try to double (or triple) up on the 2 MPs. Though, even if it's ruled or errated to read that the card may only be played once per failed strike, there's the interesting case that, should a Nazgul attack gain an extra strike, the defending player could still potentially slay its mount several times!
Top

CRF: Active Condition wrote:Annotation 8: An action that requires a target is considered to have the active condition that the target be in play when the action is declared and when it is resolved.

All three could be played in the same chain of effects targeting the same Ringwraith, but only the last would successfully resolve.

At least, I'm of the opinion that the "If still in active play following its body check" for the discard action wouldn't remove the need for the declared target to still exist.
It is not our part here to take thought only for a season, or for a few lives of Men, or for a passing age of the world.
One [online community] with hammer and chisel might mar more than they make... Cautious skill!
Double Standards.
Top

In the case of a Nazgul, it would never be in play following the body check(s) as it would normally be discarded or placed in the MP pile. Only a Ringwraith would possibly still in be play (wounded). The effect is conditional - "if" and it only applies to Ringwraiths and not Nazguls.

But the whole point of playing multiple copies is to get the MP. Even if the ringwraith discarding effect of Mount Slain cannot resolve, you can still get the MP.
Top

All three would work fine. Discarding the RW is an action triggered by the Passive Condition of the RW still being in play (it is entirely possible to play Mount Slain even if the RW was already eliminated by the bc, as the bc's chain must be done immediately after the failed strike -- see CRF, Strike Sequence, Annotation 19). That action would be the first declared action in the chain of effects immediately following the one in which Mount Slain resolves, and would fizzle or not without affecting the play of Mount Slain.

Or, at least, it would if I didn't keep forgetting about 9a:


Annotation 9a: If a card is required to be discarded by some passive condition, the card is discarded immediately when the condition resolves, not in the following chain of effects.

Nevertheless, it does not affect the play of Mount Slain.
Remember, NetRep rulings are official. This does not necessarily mean they are correct.

You probably aren't playing Fallen Wizards correctly. This prompted the backlash erratum that I will link to as soon as I notice it is officially posted.

Ah yes. I forgot we were dealing with a Permanent Event here, so an ongoing passive condition it is! All good.
It is not our part here to take thought only for a season, or for a few lives of Men, or for a passing age of the world.
One [online community] with hammer and chisel might mar more than they make... Cautious skill!
Double Standards.
Top
Post Reply
9 posts • Page 1 of 1