Anything MECCG related that doesn't fit in another forum.
The Global Players List is located here.
Post Reply
40 posts

It has been often noted elsewhere that some Meccg fanatics have a one card obsession (OCO) with a particular card. I think this is interesting, and also why some of us have a OCO is also more interesting still.

In my case, my OCO is for the card 'Lake Town' in the original Wizards sets. The art is by Eric David Anderson. Ever since I read the Hobbit as a child, I have felt Lake Town is my 'spiritual home'. Just seems so cool to live in a house on stilts in the middle of a lake surrounded by chaos. The art in MECCG looks just like I imagined it to be.

What about you?
Top

Well besides the ENTIRE world that EXIST painted by Angus McBride,

It's hard to pinpoint that at home feeling with one of his pieces.
But if I had to pick a different artist and his work, one particular item (or a few) would be...

Fate of the Ithil-stone! I just mmm can't get enough.

I am a huge Palantir Fan, it's one of my favorite parts of Tolkien's work, besides, raw corruption and how power corrupts in general.

I am especially fond of these two also:

Makes me mad they never made an Ithil-stone (minion), just in case you play a Lidless Eye manifestation, i.e. playable if you are Sauron.

Some thing like you may tap the Ithil-stone to force a bearer of a Palantir (your choice) to make a corruption check, if the cc fails force the controlling character's player to discard one card at random, instead of discarding that character.

I know it would have been strong but I think you had better store that hot potato...
You probably aren't playing Agents correctly

Stormcrow for me. No deep justifications, it just always felt right when I'd see that image.
Top

I don't know that I have a favorite card as such, but I know I've called out Persuasive Words a number of times for having such perfect artwork. The expressions, posture, and positioning all come together to make the ideal illustration for that scene. 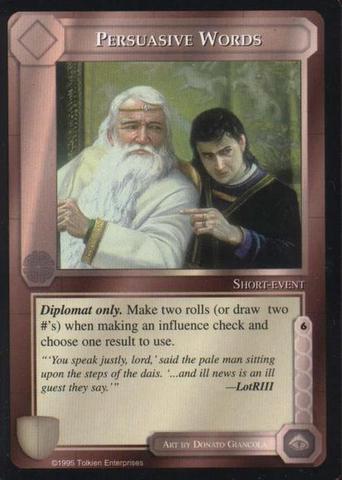 Best character from book to pic (after all McBride illustrations, of course): 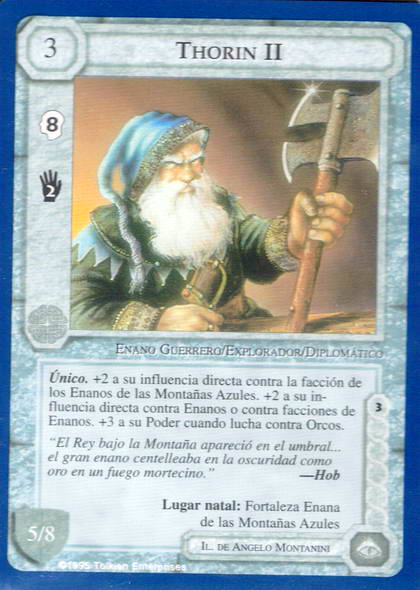 C'mon, not the Elves of Lindon AGAIN...
Top

I'm a fan of the Nazgul illustrations by Liz Danforth, especially the Khamul card. I remember that when I opened the first boosters of ME more than 20 years ago I found the illustrations of the Nazgul very cool and exciting. Usually, I don't appreciate any extensions made up by third parties to original work. So, most of ICE's additions to the world of middle-earth, like the characters of Peath, Beretar or Galva for example, don't find my approval. The Nazgul are an exception

I grew somewhat familiar with the names invented by ICE and also with the portraits on the cards.

My slight preference of Khamul over the others is probably due to the fact that he is the only one ringwraith, to whom a name was given by Tolkien.
Khamul became part of my e-mail adress as well as my user profile's name.
Last edited by Khamul the Easterling on Mon Apr 02, 2018 8:51 am, edited 1 time in total.
Top

Alliance of the Free Peoples by Stefano Baldo.
The contrast of light and dark makes you sing for joy. I love any art that expertly shows ruffled clothes and hands.

Biter and Beater by Daniel Franzier
I like the illusion that the axe appears to be negative space between the arm and body with the curvature of the axe -genius.
"Wait, there is an axe there." Also, the pommel looks like a sword of Orcrist from METW.

Invade Their Domain by Doug Kovacs
The richness of heraldry in the armour along with the right size of the balrog using a fore-arm stroke showing no fear against, I assume, Durin VI, right?


Pale Dream-maker by Liz Danforth
Again I like the ruffled clothes. This art has the beautiful contrast of sky and ground. I can sense the hobbit's bewilderment.

Bright Gold RIng by Audrey Corman
Ah, the envelope with the flap open. Then the shade along with the rings seen in the furniture. I can hang that on my wall.

The Burden of Time by Donato Glancola
Reflection in the water to me is not easy. Then there is the calm of the water and the rich sunset. Very relaxing.


Orcrist by Audrey Corman
The pommel, hilt, carvings all on a log. I need that art in my house. I can feel the joy of that artist making the picture.

FAVORITE
No Escape From My Magic by Douglas Chaffe
I can have this on my wall and not scare anyone. You have as rushing stream with trees in the autumn all at an angle. Then the
stone bridge giving a sense of secrecy, but sorrow since the water and trees will out last anything made by man or elf except the Silmarils.
Top

dirhaval wrote: ↑
Tue Feb 06, 2018 1:29 am
Orcrist by Audrey Corman
The pommel, hilt, carvings all on a log. I need that art in my house. I can feel the joy of that artist making the picture.

As I was looking up the art of all the cards you listed, I came across this great photo on BoardGameGeek: 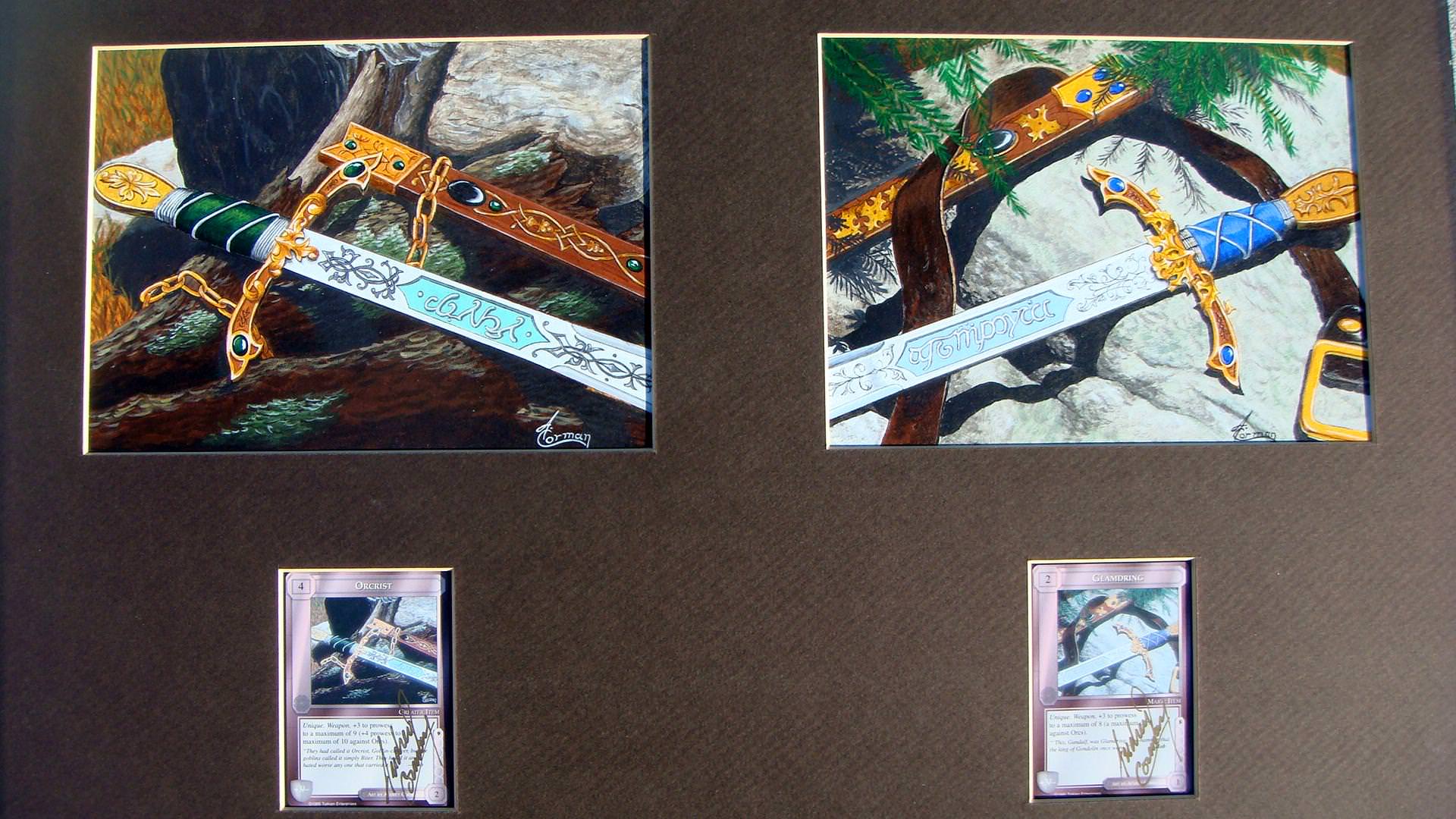 Ever since I read the Lord of the Rings I was fascinated by the Balrog. The beautiful painting by Rob Alexander comes close to how I always imagined this demon from the first age. I especially love those colours.

Back in 1995 a friend and I bought one METW starter each. My starter included Balrog of Moria. After a few test games we played our first serious game and decided beforehand that the winner could draw and keep a random card from opponent’s play deck as a reward. I lost, shuffled my play deck and he smiled and said: Now I will draw your Balrog of Moria. Guess what my friend did draw…? Some months later he quit the game and I got my Balrog of Moria back. Because we played without sleeves the card looks much worn now.

My collection of Balrog of Moria cards is not that old, though. I think I began to collect them around 2009. I guess I have 60 or 70 cards including at least one copy of every language/edition and two cards signed by the artist. A special place in my collection has my first Balrog of Moria card, though, with its torn edges. Memories...

What I love about this game is it works on so many levels - as a game, but also as one of the best examples of diverse art depicting Tolkiens brilliant world.

Thanks for these posts - great reading!

My 3 favourites in terms of the card art are probably:

1) Lake Town - Eric D Anderson (as noted in the OP)
2) Galadrial - Angus McBride (I agree, fantastic artist and I find this art to be about as close to how Galadrial would look, for me, as you could get).
3) And Forth He Hastened - Donato Giancola. Great painting and it depicts two of my favourite Tolkein characters - Beren and Luthien.
Top

3) And Forth He Hastened - Donato Giancola. Great painting and it depicts two of my favourite Tolkein characters - Beren and Luthien. 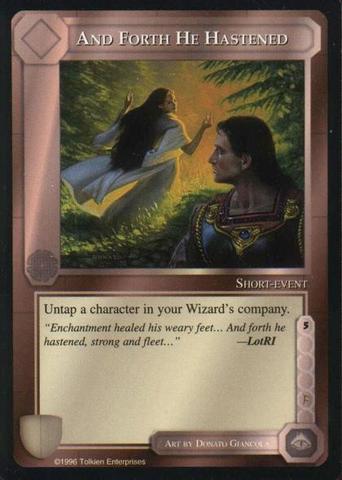 Am I the only one that sees Beren as Michael Douglas in that pic?
C'mon, not the Elves of Lindon AGAIN...
Top

I dont (I must admit). However, this is another great idea - what MECCG images remind you of real life people. Interesting one.
Top

Cool, i have one. Here comes Michael Jackson:

Shapeshifter wrote: ↑
Tue Feb 06, 2018 9:09 pm
Ever since I read the Lord of the Rings I was fascinated by the Balrog. The beautiful painting by Rob Alexander comes close to how I always imagined this demon from the first age. I especially love those colours.

The original painting by Rob Alexander is currently up for sale on Ebay!

Shapeshifter wrote: ↑
Tue Feb 06, 2018 9:09 pm
Ever since I read the Lord of the Rings I was fascinated by the Balrog. The beautiful painting by Rob Alexander comes close to how I always imagined this demon from the first age. I especially love those colours.

The original painting by Rob Alexander is currently up for sale on Ebay!

I can hardly image someone is willing to sell such a piece!
Top
Post Reply
40 posts