Anything MECCG related that doesn't fit in another forum.
The Global Players List is located here.
Post Reply
9 posts • Page 1 of 1

It's taken some planning, some cash, some trades, and a whole lot of searching, but I've finally built, sleeved, and stored all 22 of the challenge decks - the 10 originals, and the 12 community-designed ones. (The reference document I used can be found in this forum post.) I store them in a pair of "Stanley 10 Removable Bin Compartment Deep Professional Organizer" boxes, which, being practical hardware/tool organizers rather than fancy specialty trading card products, cost less than 15 USD apiece. Remarkably, every compartment fits an 80+ or 100+ card deck box perfectly. 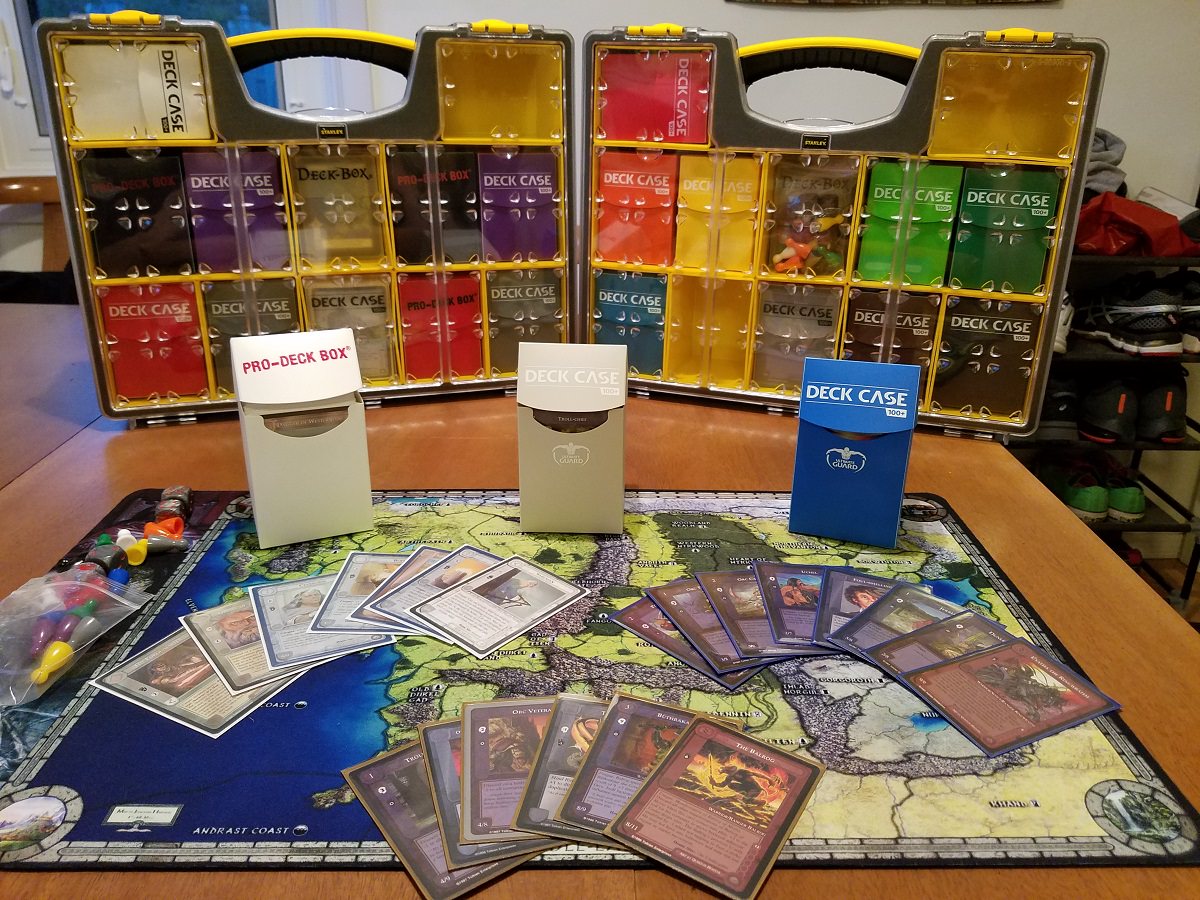 The deck boxes and sleeves I chose vary in manufacturer. For the Wizard and Fallen-Wizard decks, I use a mix of Ultra Pro and Ultimate Guard deck boxes, based on color availability. I would have liked the Hero Wizard decks to be one brand and the Fallen-Wizard decks to be another, but it wasn't meant to be. The colors themselves match roughly to the colors of the wizards: white for Saruman, blue (navy blue, though it looks black in these pictures) for Alatar, purple for Pallando, red for Radagast, and grey for Gandalf. Conveniently, my favorite sleeve manufacturer, KMC, makes their Hyper-MAT sleeves in exactly those colors (and green, black, and clear), and with 80 sleeves per pack, sleeving a pair of 110 card decks in one color worked out quite nicely. In the center of the box, I have the Hero non-Wizard deck in ivory Dragon Shield sleeves (more on those later), a bag of colored pawns and dice (put one pawn on your company and another of the same color on a map to indicate the region they're in), and, if the players are truly desperate, an 80-card deck box containing a copy of every region. 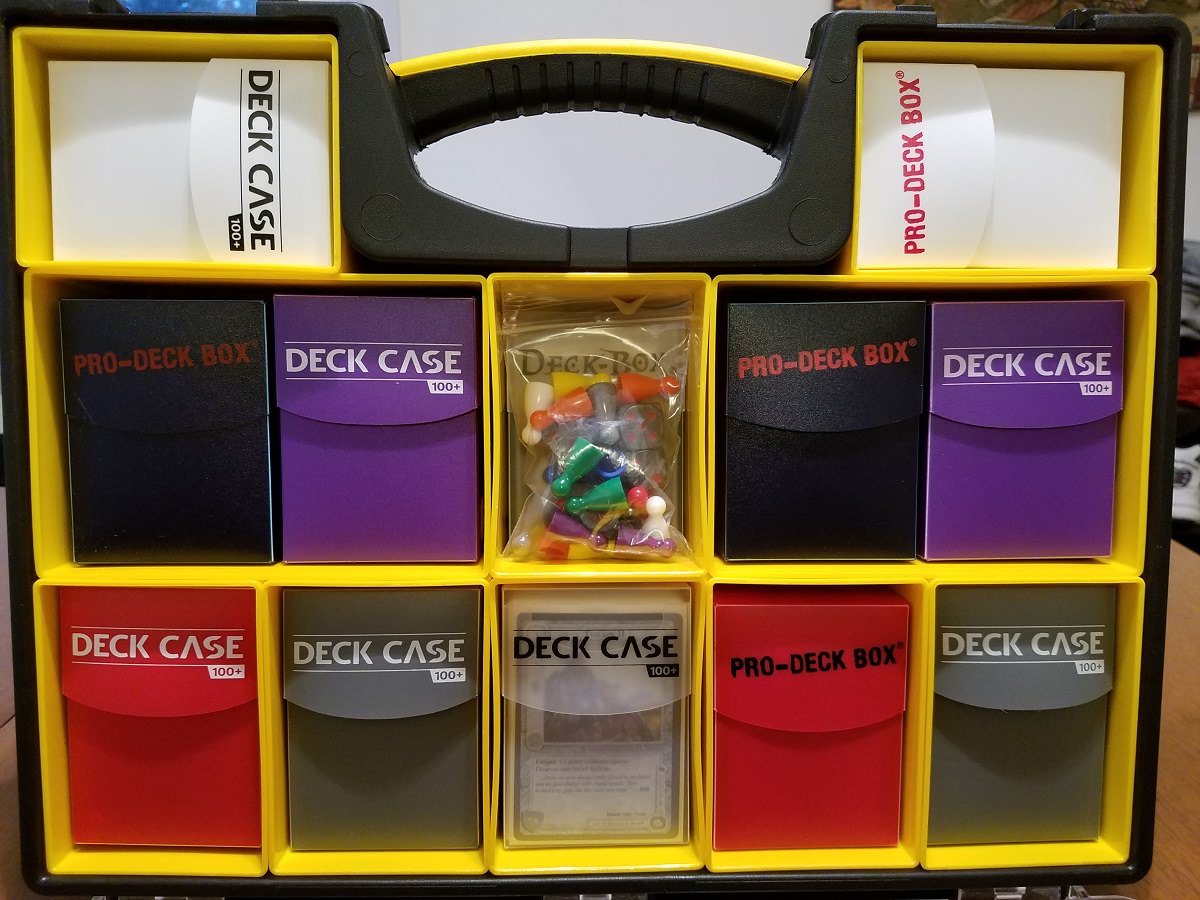 For the minion decks, I was able to get more creative. Each Ringwraith was given a color based on the order they appeared in the challenge deck document: red for Adûnaphel, orange for Dwar, yellow for Hoarmûrath, light green for the Witch-king, dark green for Indûr, turquoise for Ren, royal blue for Uvatha, brown for Akhorahil, and black for Khamul. Ultimate Guard offers a brilliant range of deck box colors, but KMC did not offer a similar palette in their sleeves, so I had to turn to another often-praised sleeve manufacturer - Dragon Shield. I don't like Dragon Shield sleeves as much as KMCs, since they're harder to double-sleeve and some aren't fully opaque, but if you're looking for color and quality, they're the one to use.

Here, things were trickier because Dragon Shields come in packs of 100, so 110 card decks had the potential to be awkward. I mitigated this by sleeving the locations in grey, reasoning that the site deck and main deck never mix anyway. Fortunately, every deck had at least 10 sites, so this worked out very well. In fact, I was able to use the few leftover sleeves in the Dark Arda deck I'm building (based on Goblin King's card list), and since I only needed four of each color there for the Ringwraith "packs," 100 sleeves per color was exactly the right amount. This box also contains a region pack of its own, a Sauron deck sleeved in grey, and a Balrog deck sleeved in gold (in the tan deck box). 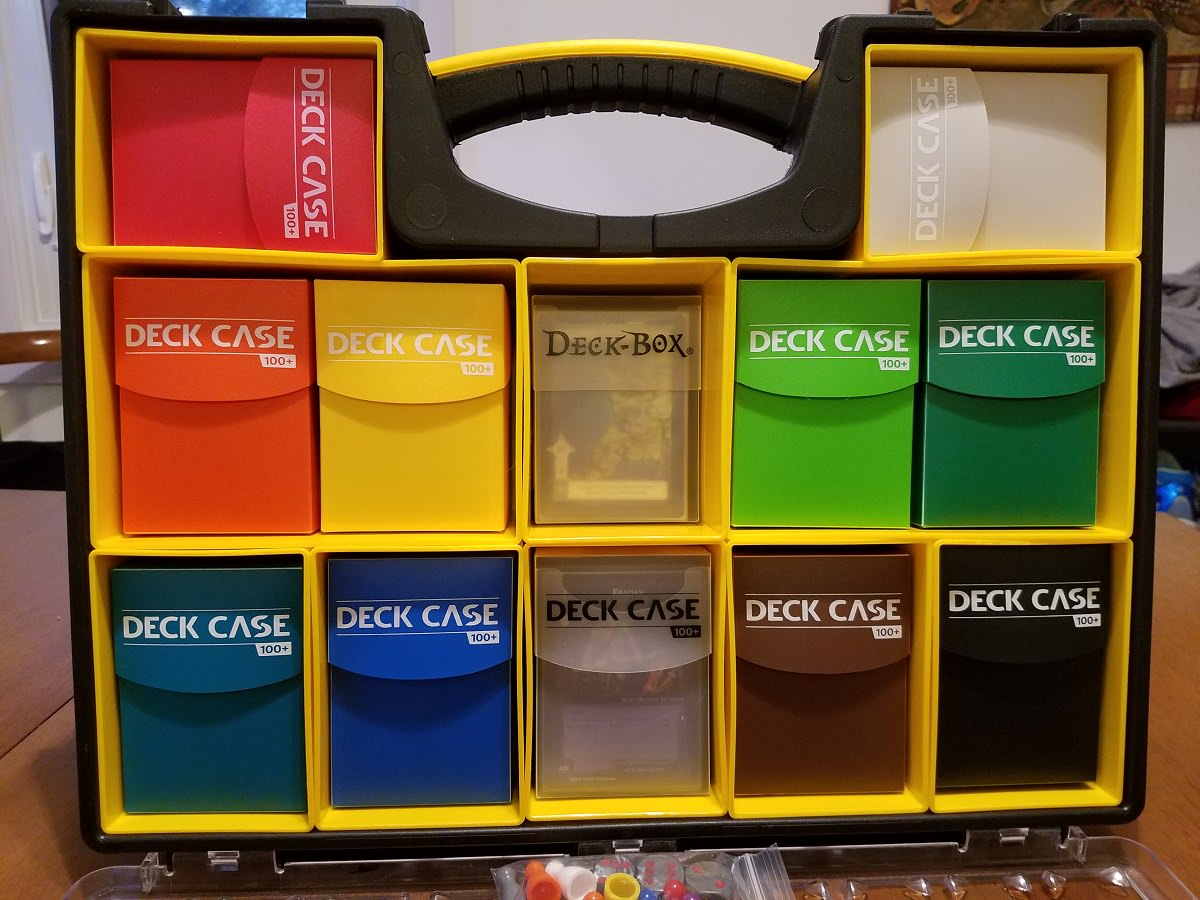 So how did I gather the cards for all this? It wasn't easy. I came into the MECCG game late, and beyond a full set of one of each card (which I wasn't about to break up for deckbuilding), I don't have much of a collection. Fabio from CardGameGeek got me on track with some of the official premade challenge decks, and both Wim from Gwaihir and Karen from House Atreides had some singles I needed. eBay helped (particularly, the seller aneythang55), and I also made use of TradeCardsOnline to dig up some cards as well, where I had several very pleasant transactions with users on that site. The absolute hero in all of this, though, is Wolfgang and his store Eaglecard. He was incredibly helpful, digging out literally hundreds of commons and uncommons for me, as well as a number of rares that I needed. Without his efforts, this project would have taken far longer and been much more of a struggle.

So, after many months, many dollars, and many hours, I finally have all 22 challenge decks, and they should be a pretty decent platform to play the game casually with friends. Are the decks any good? I've heard mixed opinions, but they're built, they're accessible, and now they're mine, and that's what matters most. I can bring the decks anywhere without much trouble and have them ready to play with people who like the game but don't own cards or decks, which is huge. Thanks to everyone who designed and refined the decks in 2010-2013, and thanks very much to the people who helped me build them five years later.
Last edited by CCG Collector on Thu Oct 18, 2018 3:45 am, edited 1 time in total.
Middle Earth and other CCG unboxings, booster openings, and guides: https://www.youtube.com/c/TheCCGCollector
Top

That looks like a hell of a storage idea. I know where I am headed after work today...
Top

That looks simply fantastic! Thanks for sharing. Super cool! Congrats on getting them all built!
Top

That speaks highly of your passion and awe to the art, the tale, and of your own values. I am glad to know
that such an act has taken place.

I picked the case up tonight. Thanks again for posting it.

Testing it I’ve found that you can pull the bottom row of boxes out and comfortably fit two game mat tubes. 7 decks and two mats makes for a very nice mobile game day.

Now I just need to find someone willing to play.

Come on out to Denver sometime and play with our group.

But yes, having a local friend to play with is ideal.
Top

Congrats! I've also constructed a standalone set of all the Lost Challenge Decks myself and am slowly playing my way through each and every one of them at our local gatherings. I've found they are decently competitive with each other and do a good job of giving the player a taste of what each avatar's play style is like.

The hardest part, hands down, was finding all the copies of Dark Tryst. Speaking of which, I'm slightly disappointed the creator resorted to maxing out Dark Tryst in pretty much every one of the RW/FW decks.

I like your case idea too, I just haul around a big cardboard box full of deck cases.

...and yes, come out to Denver for some games!
Top

Amazing!
I built the 5 hero ones (and it was already quite some work without most of the sideboard).
You have now inspired me to build the lost ones.
Many thanks.

Glad you found someone to help you out with those!