Well, it took a significant amount of time, an appalling amount of money, and plenty of plain old-fashioned being in the right place at the right time, but I've finally assembled a full, physical Minion Arda deck based on Goblin King's decklist. Every card is legitimate, black-bordered MECCG (no proxies, no Wizards Unlimited, no Challenge Deck reprints), and every one in the list, including rare Balrog cards, MEAS R1s, and MELE chase rares are present and accounted for. The deck container is a black Dex Protection Supreme Game Chest with the removable compartments taken out for more space. All told, the box holds 1082 double-sleeved cards (1050-card deck plus 32 havens). Play deck is black, characters are dark blue (top right), minor items are purple, tested rings are red, MP sources are green, havens are clear, and the rainbow is a set of Ringwraiths and modes for all nine Avatars. Not pictured is a full set of minion locations, sleeved in grey, which wouldn't fit in the case and consequently have their own deck box (Ultimate Guard 80+ Deck Case, Land Edition (Swamp)). The inner sleeves are KMC Perfect Fits, and the outer sleeves are either Dragon Shield Mattes (the Ringwraith Rainbow) or KMC Hyper-Mats (everything else). 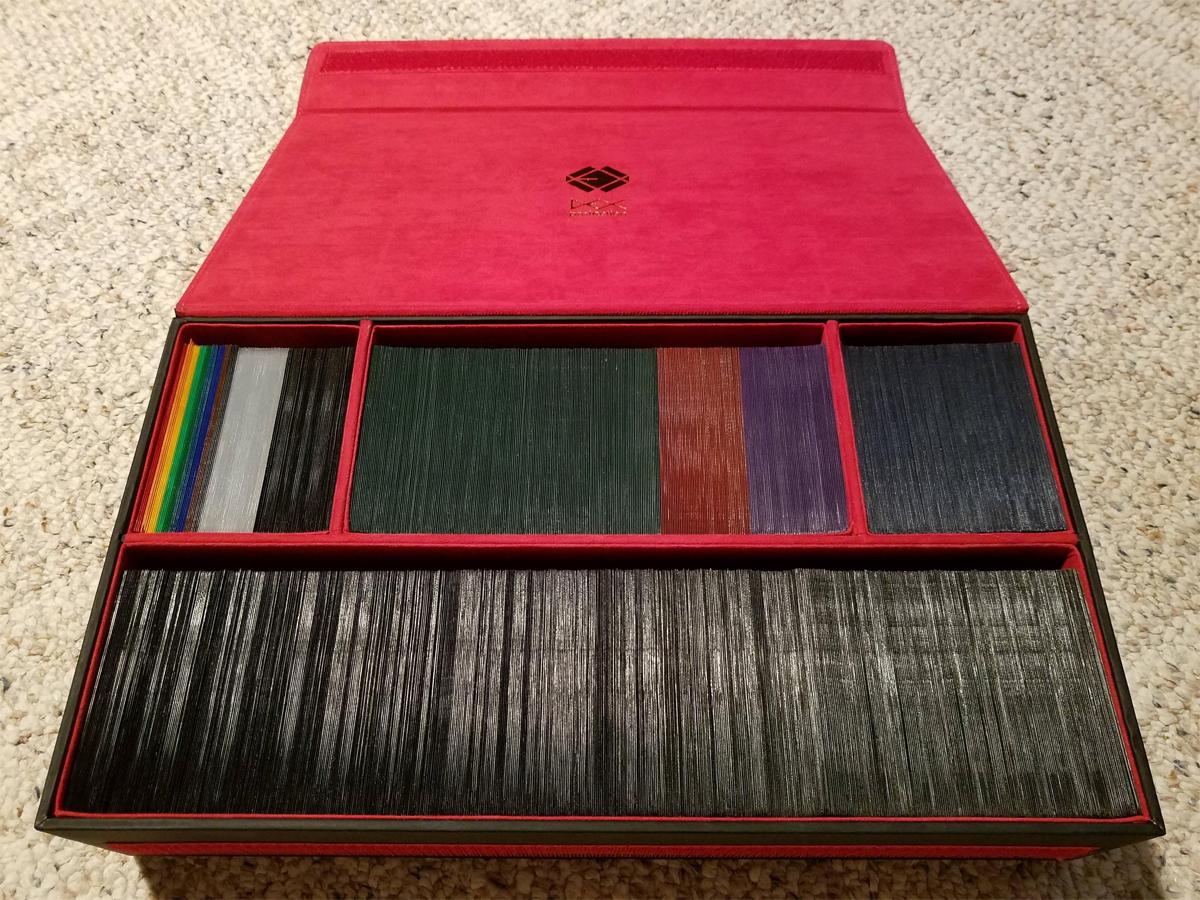 That is a thing of beauty! Mine looks nowhere near as nice. I hope you are able to get it on a table locally. Or fly out to Sacramento California for ConQuest (March) or ConQuest Avalon (November) and we will play with you.
Pro tip on flying with a game cube: ALWAYS take it as your one carry on item. That way, you can be there when they inspect it and you can make sure they don't loose any cards. Too many people have checked game cubes into luggage only to find its been rifled and cards are now missing.
Top

Wow! What a nice setup. That box is amazing too. I haven't heard of Dex Protection before but that's the nicest card box I've seen. Thanks for sharing!

Do you mind if I put those rules together in a formatted Word document? I plan on playing this format soon, but the plain text rules are a little hard for me to parse.

Also, in the RIngwraith Mode Rules section, you say that Fell Rider mode is both overt and covert, and don't mention Black Rider mode. I assume that Black Rider is the covert one, and Fell Rider is overt?
Middle Earth and other CCG unboxings, booster openings, and guides: https://www.youtube.com/c/TheCCGCollector
Top

A version of these rules in a nice format is what this world needs! And good catch on the overt/covert typo! Hoping to get my set back on a table in a couple of weeks.
Top

Sorry this took so long, but I've finally put together a nicely formatted version of your rules. I based it on one I had written for Hero Arda, so there are additional sections and text that your rules did not include, and some parts are generalized so as to not make them specific to your particular deck list. I also took some liberties with your wording in places; hopefully that's alright.

EDIT 2: I've removed the outdated document attached to this post; the latest version is a few posts down.
Last edited by CCG Collector on Tue Aug 13, 2019 4:52 pm, edited 3 times in total.
Middle Earth and other CCG unboxings, booster openings, and guides: https://www.youtube.com/c/TheCCGCollector
Top

Nice work -- the rules look really great to me! Though I feel that perhaps, for Minion Arda, the treasure hand ought to be called the swag hand.

Thanks for your interest and your efforts!
How are Palantirs used? It seems incredibly limiting to only allow their usage through one of the three Focus Palantir cards in the 600+ card play deck. Are there changes in the MELE rules that account for this that I'm not aware of? Otherwise, one variant I've seen and like is allowing any sage to use a Palantir.
RESPONSE: I've not seen the use of a Palantir being a very big thing in the game. Ringwraiths are generally more interested in rings.

When playing this variant, have you noticed some minor items are more popular than others? If so, would it make sense to offer priority to certain players based on their characters? In Gandalf Gene's Arda rules, for example, Black Arrow is offered first to anyone who drafted Bard, then to anyone who drafted Brand, then to whoever drafted the Man with the highest mind.
RESPONSE: Only one unique minor item in Dark Arda and that's Thoror's Map. I've had no complaints or whinging over the card. But there could be many house rulings on the topic. I would say it can go one of three places, first it could go to the player who drafted Lieutenant of Dol Guldur since that's where Thoror was taken as prisoner. It could go to any character controlled by a player who drafted Khamul as their Ringwraith or as a follower to their Ringwraith (since he was in charge of Dol Guldur when Thoror was taken prisoner. Or, finally, it could go to the drafted dwarf minion with the highest mind.
The thing about the map is that it is kind of its own curse. This happens in Arda a lot. The person who gets it basically puts a target on his head. His hazard player immediately starts building up dragon hazards in his hand because he knows his opponent will head there eventually. I've been slaughtered so many times heading to dragon country to cash in the map.
Top

Hello very interesting, I'll try to build my own cube (without Balrog and against the shadow).
Have you tried to add the new fan made set the Necromancer even if many references are about Sauron ?
Do you think ringwraith could start with their special item (Adunaphel's lute, Bat winged helmet, Dragon helm of huon, Vasamacil, ...) and/or permenanent event (The Morgul lord, Overlord of Dol Guldur, ...) or is it overbalanced as for the Ringwraiths’ Unleashed cards ?
Don't Follow Leaders
Watch Parkin' Meters
Top

I can't believe it's taken me this long to finish the edited and updated version of the rules, but here you all go. Again, let me know if you have any suggestions (though "swag hand" didn't make it into this one

Thanks for posting. I'm not aware of cvc minion cards. I would say take it out since cvc is almost always on. Have you had any luck getting this to a table? We've had 3 or 4 players. I'm hoping to bring it to the November convention in Sacramento and play it there.
I look forward to reading your version of the rules and I'll get back to you.

To answer earlier questions, I've not included The Necromancer dream card set with this game. It is certainly possible. I prefer to see how it balances out and plays as is for the time being. I'm more interested in just playing regular games with The Necromancer cards!
But that could happen in the future. I have been toying playing with the wizard specific attachments from Fallen Wizards in the regular ARDA deck. But honestly, the game plays great without them and I'm not sure what more they add. In any case there is nothing wrong with any of these ideas. Play what is most fun for you and your group of players!
Top

Goblin King wrote: ↑Wed Aug 28, 2019 3:35 pm I have been toying playing with the wizard specific attachments from Fallen Wizards in the regular ARDA deck. But honestly, the game plays great without them and I'm not sure what more they add. In any case there is nothing wrong with any of these ideas. Play what is most fun for you and your group of players!

Sideboard would be accessed by either tapping Avatar (for resources) or discarding a Nazgul/Maiar permanent event (hazards), and cards like Smoke Rings or an Unexpected Outpost could be included in the main deck as well.
Top
Post Reply
51 posts