by CCG Collector
Hard to believe the first post on this forum about Arda was back in 2009, but it's true. It's interesting for me to read the rules document now, because it includes a lot of concepts I don't touch, like Elf-Lords, Arda-specific errata/text (noted in the document as being from "Virtual Card Set 1: The Road Goes Ever On"), scenario-specific Arda cubes (Dragon Hunt and Northern Wastes are the two examples given), and so on. As someone who's relatively new to the game, it's hard to know how much of that is actual, regularly used rules for the bulk of the players, and how much of it is options and suggestions for those looking to expand their Arda experience.

So, for those who have been in the game for a while, where does Arda stand these days? How is it usually played? We've had some great posts on the forum here lately, especially with the introduction of a Minion Arda deck (the first of its kind with an actual decklist, as far as I know), but it seems that most people, myself included, gravitate toward a vanilla Hero Arda experience, with no thought to special scenarios, additional alignments, or anything like that.

In fact, a lot of people seem to have taken it upon themselves to revise the Arda rules for their own personal playgroups, sometimes in very positive ways, sometimes in odd ones. Two that have heavily inspired me are "Arda Revised," which, among other things, suggests that the MP deck be presented in the same way as the character and minor item decks (MP hands are 2 cards instead of 5 as a result), improves the ring deck, and allows any sage to tap to use a Palantir; and "Gandalf Gene's Arda Deck," which adds some favorable changes to the character and minor item drafting processes.

So what's the state of Arda these days? For the people who play it, what themes and alignments do you use, and what rules do you follow? Is there a bigger Arda community in Europe than in the USA, and, if so, is that why I haven't heard much about it? And finally, are there any plans to update the rules document to reflect the modern play style (if it's actually any different), or would there be any interest in a rules compilation? I've put together one myself (yeah, I know, me and everyone else who's played a game of Arda), so perhaps that could be a starting point if none exists.

by Kjeld
For a while, I was working on creating a special dream card set for use with hero Arda, with the intention of bringing more life to some lesser-used cards and making many of the iconic characters a bit more exciting to play (e.g. redesigning Legolas and Gimli so that they do something fun when they're in the same company). Many of the cards I modified or copied directly from the virtual card and DC sets (especially if it's a fun character like Grimbeorn the Old who otherwise isn't represented).

This effort began with my desire to better balance the avatars for the Arda format, which included adding the three Elf-lords (Cirdan, Elrond, Galadriel) as playable avatars. I created these as double-sided cards, with the "true" version on one side and a "fallen" version on the other. The idea is that you begin the game with the "true" version, but if you're avatar ever fails a corruption check, it flips to the "fallen" version. While still a powerful character, the fallen version reduces your MP potential. The nice thing about this approach is that each fallen version has a criterion that, if met, allows the avatar to be redeemed, and flip back to its true side. My purpose in doing this was to encourage players to take more advantage of powerful spells and item cards that they might otherwise avoid due to the danger of losing their avatar completely. This double-sided approach lessens the risk somewhat.

I also added some new characters, allies, and factions (from various DC and virtual sets), made Vilya, Nenya, and Narya permanent events playable on the Elf-lords to make their power level more equal to the wizards (but at the cost of some additional corruption). Lastly, each wizard also has a new "companion" card, the idea for which I drew from the FW stage events. So, for example, there is a Grima Wormtongue ally that gets an additional bonus if Saruman is your avatar. And Galva is now associated with Radagast, Vygavril with Pallando, and Haldalam with Alatar. Shadowfax can untap Gandalf.

Anyhow, just a side project I've been playing around with. I haven't played with these (or even printed them out yet), but think that, like the virtual card sets, such an effort makes a lot of sense in order to revise some cards to be more fun and useable in Arda format.

by CDavis7M
I've played Gene's Arda deck a few times. I just "arrive and drive," I don't set it up. And I've seen other people play it a few more times. It's almost always exciting on the hazard side. Especially the Free Council. People are always saving their corruption boosting events for the end, and playing Lure of Power, Traitors, etc. I've seen and heard of games where over half of characters corrupt at the Council.

The hazards are somewhat focused on Orcs and Trolls. They are easy to key and have lots of enhancers.

But overall, I think it is pretty vanilla.

One interesting "house rule" is that you HAVE TO tap to support corruption on the wizard to make it auto if you can. People were always risking it and with 4 or 5 people, and corruption boosters, it's just too easy to lose a wizard, which sort of ruins the game if it happens early. Just last weekend we had a guy roll a 2 and lose his Wizard, which is how I learned about this rule. We made him go back and tap a character. I think the rule is a good idea for our group. Your group could be different.

I also like that you get 2 of the 3MP big mind characters (but including Gimli) and a pile of the smaller characters. Engineering a starting company is fun.

We have tried playing hazards different ways. It seems to work best when you play hazards on the player that goes after you. That way you play your resources, then you clear your hazards out of your hand, and draw more resources. With this, you can spend a few turns thinking about what sites you want to go to. It speeds things up.

Ring tests seem hard to come by but our group will trade cards fairly often. Discarding MP often is key. If you don't have a test and can't trade, toss the ring.

We start with the wizard, and you can start at their homesite. This all speeds up the game.

If you have a group of people meeting for MECCG, a game of Arda is a great way to start.

I'd guess that there are plenty of people playing it and few people talking about it.

My starting draw for one game. But I ended up passing it to another guy and playing 1v1 instead. I didn't take a picture of my 2nd Arda draw.

I drew Paths of the Dead and Strider. But Strider and Aragorn bounced each other back into the character decks. They got shuffled in with the rest of the characters to draw and I ended up drawing Aragorn! 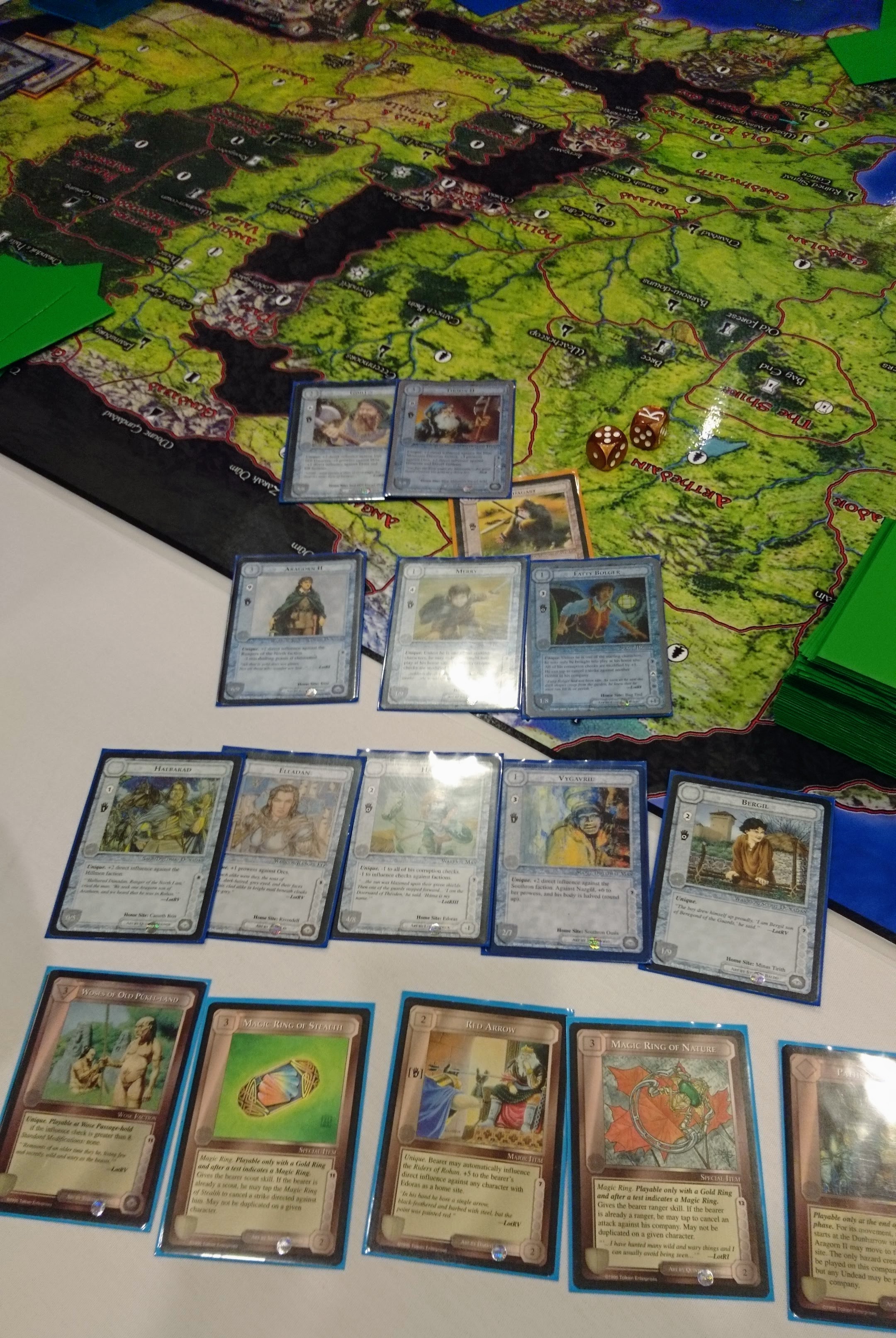 by Goblin King
ARDA has come a long way and I appreciate this topic. I've played four or five different versions in the last decade.
I've played the original at Gencon. Let us not forget the original intention of this game was pretty different. It has a lot of cards in it with altered text in order to fix those cards. It also is played with up to 7 people, two players having Elf-Lords. That version of the game is fun and the corrected cards make sense.
The Gandalf Gene version is the version I'm most familiar with. It was built with the expressed goal of having more focused resources and hazard strategies in the cards it uses. It also does not use any non-errata text on cards. There are several house rules that go with the deck when Gene is playing. The one about requiring all support to save the wizard is one of them. This rule rose out of experience. You have someone drive 4 hours to a gathering to play MECCG. He hops into an ARDA game and faces a corruption test of 2 or 3 on turn one. He decides to risk it and spends the next 2 hours waiting another person to fall out of ARDA so he has someone to play with. Not a good use of his time.
There's another version of ARDA I've seen around that has several of the major quest cards sitting off to the side of the map in a face up position. These are cards like King Under the Mountain, Through the Smoke Cone etc. All players are considered to have access to these cards and, if at any time they play all the conditions, they just claim the card and the marshaling points. Each card can only be claimed once. I thought this was a very cool addition to the game. It does require more analysis on players part.
My own version of hero ARDA is a modified Gandalf Gene deck with more cards from later expansions thrown in like Elven Rope and a few more roadblock cards thrown in. Gene hates roadblock, but I don't mind it too much in small doses.
And then there's DARK ARDA which I really love and still want to play much more of. It is such a different strategy from ARDA. I should mention that playing ARDA so much over the last few years has taught me that ARDA has its own variations on Strategy from other forms of the game. But I'll leave that for another post at another time.
All times are UTC
Page 1 of 1