Any rule erratum or clarification submission for the upcoming 2019 ARV should be posted here.
Post Reply
26 posts

That is not what reassigning means. It is meaningless without an initial assignment of strikes.

(edited previous post to add final point)
It is not our part here to take thought only for a season, or for a few lives of Men, or for a passing age of the world.
One [online community] with hammer and chisel might mar more than they make... Cautious skill!
Double Standards.
Top

Theo wrote: ↑
Thu Feb 28, 2019 7:23 pm
That is not what reassigning means. It is meaningless without an initial assignment of strikes.

Theo wrote: ↑
Thu Feb 28, 2019 7:09 pm
Alatar does not reassign strikes, since his ability can only be triggered before strikes are initially assigned.

Anyway Alatar is listed as the card which reassigns strikes.
We will not speak of such things even in the morning of the Shire.
Top

As he could have were it not for the CRF entry which requires that he face a strike first.
It is not our part here to take thought only for a season, or for a few lives of Men, or for a passing age of the world.
One [online community] with hammer and chisel might mar more than they make... Cautious skill!
Double Standards.
Top

My own opinion is that ICE never meant for any card or effect to change who actually faces a strike after the strike assignment portion of resolving an attack was complete. All such cards work perfectly fine if you have to sort out any special restrictions or abilities on who faces strikes before moving on to any character's strike sequence.

But I can absolutely see how it can be read the other way. It might just have to come down to what the voters think will make for a better gameplay experience going forward. It's not like we can go back and ask ICE for clarification now.

I remember having a lengthy debate about Bow of Alatar when it came up for the first time in our playgroup last year.

While I disagree with Moriquendi's interpretation of how this card was meant to be used, I do agree it is a very worthwhile issue to get sorted out with an official clarification.
Top

Konrad Klar wrote: ↑
Wed Feb 27, 2019 9:41 am
I agree with Zakath.
Text of Bow of Alatar may be not super clear, but it contains everything what is required to interpret it, and does not contain errors.
As such it requires only clarification.
"May only by tapped for its effect before a strikes are assigned."

I agree with Konrad.

The usage of the Bow of Alatar, is similar to his innate ability, to face a strike.

But IMHO, this card strictly has usage for Alatar to go up to a sweet spot, and hit the pipe, (i.e. Tapping to sideboard, every turn). Then while sideboarding EVERY turn (tapped) he still gets to take a "pot shot!"

Nothing more, nothing less.

It's not Skin-changer, it's not Usriev of Treachery, etc
You probably aren't playing Agents correctly

No one mentioned annotation 18?


CRF, turn, combat, Strike Sequence wrote:Annotation 18: When a defending player chooses to resolve a strike against a particular character, the only actions that may be taken by either player until the strike dice-roll is made are the following:

the attacker may decide to use any or all of his remaining -1 modifications due to strikes in excess of the company's size,

a target untapped character may take a -3 modification so that he will not automatically tap, and

the defending character may play resource cards that affect the strike.

An action that has the condition that a target character tap, but which otherwise has an effect not outlined here, may not be declared at this point.


Alatar himself already has a similar CRF statement to this proposal:

Alatar must teleport and declare he is facing a strike before any other strikes are assigned.

Having someone else face the strike affects the strike. I would say in a more-major way than just about anything else.

But it seems like incorrect language to change who faces a strike for a strike that a character is already in the process of resolving.
It is not our part here to take thought only for a season, or for a few lives of Men, or for a passing age of the world.
One [online community] with hammer and chisel might mar more than they make... Cautious skill!
Double Standards.
Top

There is an ICE Ruling on the topic of whether resources can be used to allow one character to face/steal/reassign strikes that were already assigned to another character.


ICE Digest 34 and 37 wrote:>#2) Usriev of Treachery. A company of 3 characters(X,Y,Z) is facing an attack of 5 strikes, and X bears an Usriev. Can the Usriev be used to protect Z(for example) from having to face any strikes at all? Or, because the strike originally assigned to Z was reassigned by the Usriev to X, then Z must be assigned one of the remaining two strikes? I'm confused.

>Truth be told, the original question was whether or not the Usriev could be used to reassign strikes once they were assigned(i.e., could the Usriev protect a character from having to face ANY strikes). Now, here's another question: Can the hazard player use an "attacker chooses defenders" creature to FORCE the Usriev's wielder to face two strikes?

From what I have seen, there is no possibility for one character to face a strike that has been assigned to another character. I agree that the CRF on "reassigning" (really just "assigning" different from normal) is what Bow of Alatar does.

Also, consider when the effect of Bow of Alatar would be used if it could "steal" an assigned strike -- at Step 4) of the Strike Sequence. 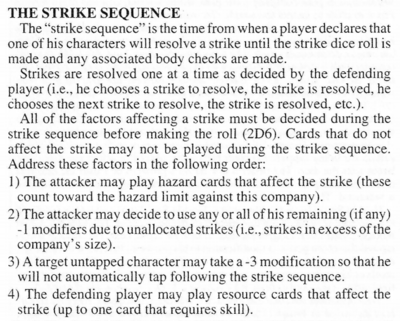 Did you not follow my previous post? Once a strike is chosen as the next to be faced then there could be no benefit from using the Bow.
I see no reason that the Bow could not be used up until then to relieve the assigned character from facing the strike.

Also, the Usriev effect triggers when the first strike is assigned; it has nothing to do with reassigning strikes, or facing strikes originally assigned to other characters. Perhaps you should move your post into a separate thread.
It is not our part here to take thought only for a season, or for a few lives of Men, or for a passing age of the world.
One [online community] with hammer and chisel might mar more than they make... Cautious skill!
Double Standards.
Top
Post Reply
26 posts